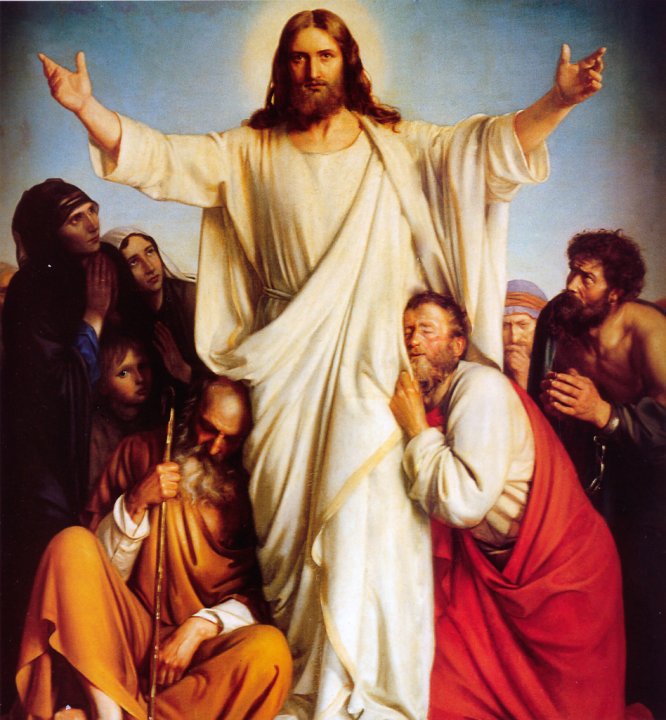 3rd SUNDAY OF EASTER-B
I Reading: Acts 3:13-15.17-19: You killed the prince of life. God however raised him from the dead.
II Reading: 1John 2:1-5: He is the sacrifice that makes our sins away, and not only ours, but the whole word’s.
Gospel: Luke 24:35-48: So you see how it is written that the Christ would suffer and on the third day rise from the dead.
Jesus’ Appearance to the Disciples:
The Great statements of the Christian Faith, Lk 24:36-49
Peter continues to dominate the early chapters of Acts. He pointed out and preached about a monstrous crime to have put the Holy One to death and a national repentance of the Jews would lead to a spiritual revival of Israel. Peter’s hope was disappointed by their subsequent attitude to the new faith, because they continued to persecute the Church.
While John recognises that God’s love can come to perfection in us by the sacrifice of His Son who takes away our sins, to him who is our “Advocate” with the Father “one summoned to our side”, to our own unworthiness to plead.
The Risen Christ appeared to his disciples to restore their faith and to make available to them that Resurrection power that would embolden their actions and colour their preaching.
The three readings of today are meant to help us to reflect on the gift of forgiveness of sin by repentance. We recite in the Credo, “I believe in the forgiveness of sins.” God has been showing His love, mercy, compassion and forgiveness to His people from the very beginning until now. Jesus bought it at the cost of his blood; we should not refuse it; we should hasten to repent whenever we fall into sin and believe in the Good News of Jesus.
In the readings we find:
1. The exhortation of Peter to the Jews
2. The apparition of Jesus to his Apostles as narrated by Luke
3. The recommendations of John to his Christians
4. The better we know God, the less the risk we run of committing sin
5. The way to know God is to keep his commandments

This was the first appearance of Jesus to all the disciples at once. He shared the two great statements (explanations) of the Christian faith.
1.     Statement 1: Jesus is risen (v.36-43)
a.     Jesus’ first words: Peace
b.     Jesus’ impact
1)    The disciples startled and frightened
2)    The disciples were troubled and questioning
c.     Jesus’ proof
1)    He is flesh an bones
2)    He shows them his wounds
3)    He talks
2.     Statement 2: All Scripture must be fulfilled (44-49)
a.     The forewarning
b.     The utter necessity
c.     The spiritual insight needed
d.     The particular prophecies
1)    Christ must suffer and arise
2)    Repentance and forgiveness must be preached
3)    The Holy Spirit and power must be sent
Thought: The greatest of all tragedies is that some still do not accept and believe the Lord’s death and resurrection despite the irrefutable evidence.